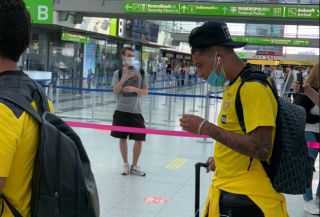 Jadon Sancho has been spotted at the airport with Borussia Dortmund on this potentially important day in the transfer saga linking him with Manchester United.

The England international seems set to join Dortmund on their pre-season training camp, with the player clearly travelling with his current club and not looking closer to a move to Old Trafford.

MORE: Did Sancho cost Man Utd the chance to sign another big-name?

Sancho is said to have agreed personal terms with the Red Devils, but a fee has not yet been thrashed out between the two clubs.

This is according to Fabrizio Romano in the tweet below, while Jan Age Fjortoft also suggests this latest development is not anything for MUFC to worry about…

Jadon Sancho is now with the team – as normal for a Borussia Dortmund player. BVB and Manchester United in talks by two weeks but still no agreement reached. Personal terms have never been a problem. It’s still up to the clubs. ? #BVB #MUFC #transfers https://t.co/0fgYyLWPnS

This being the plane that takes Dortmund to their TrainingCamp in Switzerland.
Dortmund have said if he is going to the Camp he will stay in Dortmund.

Me!
I doubt it. Still think a deal could be done https://t.co/NIukYGRwQk