According to the Guardian, Olympiacos left-back Kostas Tsimikas (full name Konstantinos) is on the way to Liverpool to complete an £11.75m transfer to the Premier League champions.

The 24-year-old’s medical with Jurgen Klopp’s side is set, with the Guardian claiming that the Greek international will put pen to paper on four-year deal worth £50,000-a-week.

The Guardian reiterate that the Reds moved for Tsimikas after failing to reach an agreement for Norwich’s Jamal Lewis, with the Canaries sticking firm to their £20m valuation for the starlet.

Klopp has been in need for a backup to superstar Andy Robertson, right-footed midfielder James Milner has deputised well but it’s now time for the Reds to recruit a more like-for-like alternative. 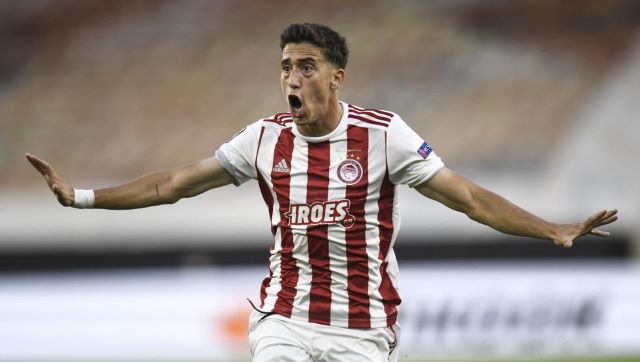 Tsimikas in action for Olympiacos.

Tsimikas’ apparent last game for Olympiacos came on Thursday night when they bowed out of the Europa League against solid Premier League side Wolves.

Tsimikas helped Olympiacos dominate the Greek top-flight this season, with the side losing just once and winning the title by a massive 18-point margin.

The three-cap Greek international also featured for the outfit in both the Champions League and Europa League this term, so he’s had a taste of football at the highest level ahead of a move to the Reds.

Tsimikas bagged seven assists in 46 outings across all competitions this season, the ace looks like a quality and relatively low-cost (by elite team standards) option to bolster Liverpool’s squad in a key area.

Liverpool ace will miss the start of the season after testing positive for Covid-19 on international duty September 4, 2020 22:03
Liverpool FC