Arsenal and Manchester United could reportedly be close to learning their fate with regards to a transfer swoop for Lille defender Gabriel Magalhaes.

The talented young Brazilian has impressed in Ligue 1 and is supposedly now set to make a decision on his future this week, with Arsenal, Man Utd, Everton and Napoli all in the running for his signature.

MORE: “Cream of the crop” or “incredibly polarising” – What Arsenal can expect from Willian transfer after divisive Chelsea spell

See below as L’Equipe claim a final decision on Gabriel’s future is close, with Arsenal previously tipped as leading contenders to sign the €30million-rated 22-year-old… 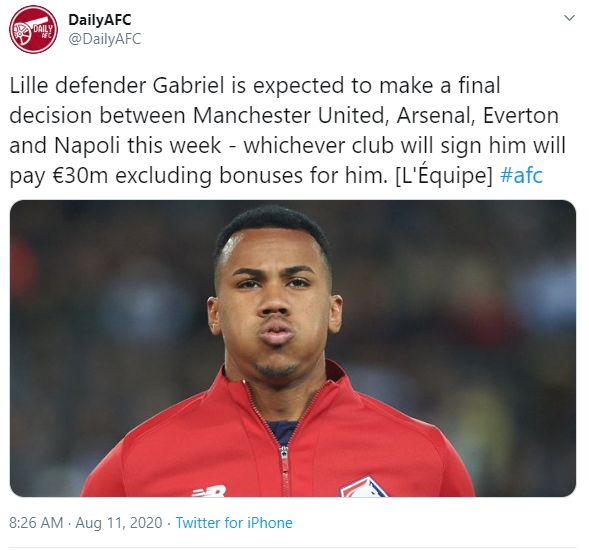 Gabriel’s family members have followed Arsenal on social media, which looks a pretty big hint, and there’s no doubt Mikel Arteta could do with a signing like this.

Gabriel looks a major upgrade on unconvincing defensive players like Shkodran Mustafi and Sokratis Papastathopoulos, with defence a clear area of weakness in this squad.

Arsenal only finished 8th in the Premier League in 2019/20, and major signings will be needed if the team is to improve.

United could also do with Gabriel as a better partner for Harry Maguire after some underwhelming form from the likes of Victor Lindelof and Eric Bailly for some time now.