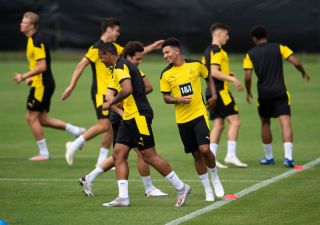 Manchester United were reportedly told all the way back in June this year that the deadline for number-one target Jadon Sancho was Aug 10.

Sancho, 20, has been relentlessly linked with joining Ole Gunnar Solskjaer’s United in a move which has the potential to be a British record transfer fee.

However, despite the constant links and reports suggesting that the young Englishman could swap life in Dortmund for Manchester, Sancho has yet to make the move and most recently has been named in his side’s pre-season squad.

According to a report from Ruhr Nachrichten, Dortmund CEO Hans-Joachim Watzke revealed to United officials over the phone all the way back in June that their deadline for a deal to be completed would be Aug 10.

Yesterday, Dortmund sporting director Michael Zorc addressed the media regarding the speculation surrounding the future of their star-man saying: “We plan on having Jadon Sancho in our team this season, the decision is final. I think that answers all our questions.

“Last summer, we adjusted Jadon’s salary to match the development of his performances. So in context, we had already extended his contract until 2023 back then.”

Despite Dortmund’s seemingly adamant stance that the Sancho-saga is now over, there is an overwhelming sense among the footballing world that the German side are simply playing negotiations tactics, with the likes of Owen Hargreaves claiming last night that Dortmund are ‘calling United’s bluff’, as per Daily Mail.