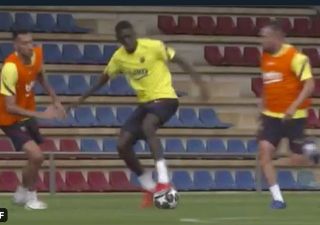 Ousmane Dembele has been included in the Barcelona squad travelling to Portugal for their Champions League tie with Bayern Munich, and he certainly looks good in training.

As confirmed by the Catalan giants in their tweet, the Frenchman has made the trip after recovering from a hamstring injury which has sidelined him for the past six months.

SEE MORE: Barcelona ace will push to re-join his former club if they don’t win the Champions League this year

Having been limited to just nine appearances so far this season, it has been another year blighted by injury problems, but Dembele will hope that he can still have a major influence on Barca’s campaign.

Quique Setien’s men take on Bayern in their Champions League quarter-final on Friday night, and based on the video below, it looks as though they might have a fitness boost for the encounter.

The 23-year-old would give them a major lift given he can add a different dynamic in the final third with his pace and movement, and so Barcelona will hope to have him available.

Given he’s been busy giving Luis Suarez, Sergio Busquets and others the run around in training this week, it looks as though he could yet have an impact for his side.