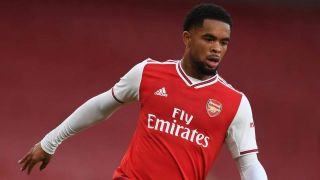 It does look like clubs will need to cut back on recruitment for at least a season or two, so there’s never been a better time for youngsters to try and force their way into the first team.

You can only do so much by playing in the youth team or fleeting sub appearances in the cup, so going out on loan is the best way to catch the eye and boost your reputation for the following year.

Arsenal youngster Tray Coyle has been impressive at youth level for club and country in recent years, so it will be interesting to see how he gets on at Gillingham after they confirmed they’ve signed him on loan for the season.

READ MORE: Premier League side fail to rival Man United and Arsenal for defender due to gentleman’s agreement

They describe the signing as a major coup because he’s so highly rated, before confirming that he can play in midfield and attack.

They also confirm that he had offers to go to Holland and Germany on loan so it does sound like they’ve done well to sign him, so hopefully he has a good season and manages to push his way towards senior football on his return to Arsenal.