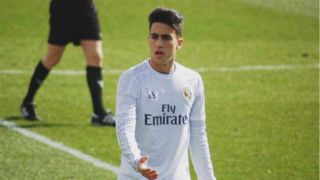 Although Real Madrid look like they will start to give a chance to their younger players, they don’t tend to produce many youngsters from a young age.

Players like Takefusa Kubo, Martin Odegaard, Reinier Jesus, Jesus Vallejo and Dani Ceballos could all be on the verge of a breakthrough, but they shone at other clubs before Real snapped them up.

Martin Calderon is an example of a player who has come through the ranks from a young age, but it appears that he’s going to leave the club.

A report from Marca has described him as one of the standout youngsters at the club, but go on to confirm that he’s set to move on loan to Portuguese club Pacos de Ferreira.

That loan deal will also give Pacos the chance to purchase half of his rights for a fee of €500k, so it sounds like they would keep him in that scenario and Real would get half of any future fee.

He was unlikely to break into the team so this will give him a chance to shine and grow as a footballer, while you also have to think that Real will have the resources to bring him back if he becomes a star.