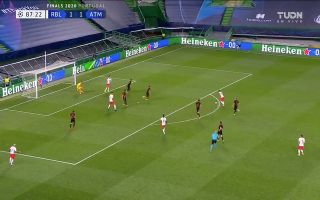 Leipzig played the ball into Angelino on the left-wing and the Manchester City loanee did well to play the ball across to Tyler Adams just outside the box.

The United States international notched the biggest moment of his career – and also Leipzig’s history – by drilling an effort towards goal, which was turned into the back of the net after a deflection.

The strike ricocheted off of Stefan Savic and flew over the line, completely catching Jan Oblak off guard.

Take a look at the youngster’s historic goal for the side below:

RB Leipzig are in the semis! ?

The pass to the assist is out of this world ?#Club2020 pic.twitter.com/oV1gbQfPzS

Pictures from BT Sport and TUDN.

Julian Nagelsmann continues to work wonders with the German outfit, they thoroughly deserve to come away as winners – even if a stroke of fortune has ensured so.