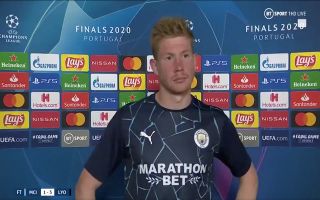 Kevin de Bruyne didn’t hold back at all when he was interviewed following Manchester City’s defeat to Lyon, which saw them crash out of the Champions League in the quarter-finals once again.

De Bruyne actually pulled City back to level terms in the 68th minute of the tie after a dismal performance from Pep Guardiola’s side, but it wasn’t enough due to super-sub Moussa Dembele.

Dembele only entered the pitch in the 75th minute but made a game-winning impact, with a controversial goal to fire Lyon into a 2-1 lead before putting the tie to bed with a rebound that came immediately after Raheem Sterling missed an open-goal at the other end.

Kevin de Bruyne is left to lament another disappointing exit from the Champions League for Manchester City.

After this shock result, Pep Guardiola has failed to take the Citizens past the quarter-finals stage in his four seasons in charge.

In Guardiola’s debut season, the Manchester outfit were knocked out by Monaco with the side seeing exits in the following two campaigns to domestic rivals Liverpool and Spurs.

It’s clear that fundamental changes are needed if the lower-profile team in Manchester are ever to triumph in Europe’s elite club competition.

De Bruyne was also a part of the City side that crashed out at the semi-finals stage in 15/16 – the season before Guardiola arrived.

That shows that the club have made little progress on the European front, after years of massive investment which hasn’t paid off in the UCL – what can the Citizens actually do to improve in Europe?

Considering the controversial goal that fired Lyon back into the lead and the equally tight call that saw City lose to Spurs last season, it seems as though this competition just isn’t meant to be for them.