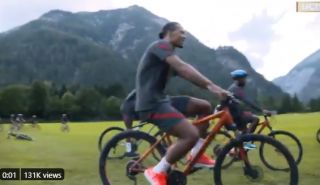 It does seem like Mane is the only player riding around shirtless, and Van Dijk clearly wasn’t impressed with his colleague.

Liverpool will still be in good spirits following their Premier League title victory in July, with the new season now only a few weeks away due to the reshuffled footballing calendar.