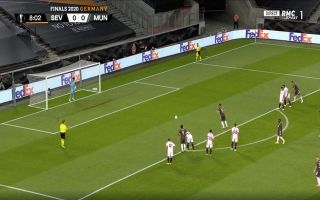 In the 7th minute of tonight’s Europa League semi-final between Manchester United and Sevilla, the Red Devils were awarded a spot-kick.

Anthony Martial played in Marcus Rashford with a wonderful pass, the England international fired a shot at goal and was then brought down by a reckless late challenge from Diego Carlos.

The referee pointed to the spot and specialist Bruno Fernandes stepped up to the spot. The playmaker reverted to his stutter-hop-step technique to fire the ball into the top corner.

Take a look at Fernandes’ spot-kick below and the incident that led to it below:

Man Utd's 22nd penalty of the season is dispatched with class ?

This is the perfect start to the game for Ole Gunnar Solskjaer’s side.