Arsenal target Gabriel Magalhaes’ father has dropped a major hint that the centre-back is on the way to the Gunners by liking a post on social media suggesting that an agreement has been reached.

Gabriel’s dad, Marcelo, liked a post from AFTV Media that reported that an agreement has been struck with the defender, with Arsenal close to finalising a move with Lille.

The Telegraph, also reported recently that the north London outfit are closing in on the signing of the 22-year-old, with Le 10 Sport claiming a deal for the centre-back will be worth around €30m.

RMC Sport’s Mohamed Bouhafsi also reported yesterday that Gabriel’s decision will be made on Wednesday, amid serious interest in the talented defender.

Image: Gabriel Magalhães’ father, Marcelo, liking a post on Instagram suggesting Arsenal have reached an agreement with the player & are close to an agreement with Lille. ? [@ZRAFC] #afc pic.twitter.com/dMWz3ej5Q2 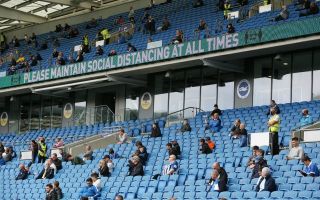 Government to postpone date for fans to return to stadiums

This isn’t even the first hints from members of Gabriel’s family suggesting that a move to the Gunners is close, with the ace’s brother and sister also letting on as much with their social media activity.

Gabriel became a regular for Lille around 18 months ago and the Brazilian has not looked back since, with the youngster turning in some fine performances that have attracted the interest of top clubs.

Gabriel does have some experience at the top level with the ace playing every single minutes of Lille’s Champions League group stage games this season.

Mikel Arteta has steadied Arsenal’s backline a little since being appointed as boss but the Gunners still need to be much better if they’re seriously going to challenge for a top four finish next season.

Defensive woes have been the thorn in the team’s side over the last few years, which has ultimately prevented the Gunners from playing Champions League football.