The Portugal international embarrassed himself a little with a tweet venting his frustrations at Liverpool fans supposedly messaging him to mock his side’s failure in the Champions League.

Aldridge, however, has hit back at Silva, saying he should look at his own game after a poor season… 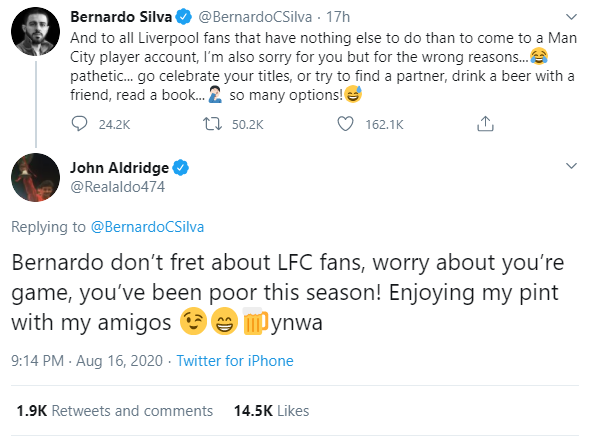 Liverpool fans will love this from their former player, and indeed they’ve shown that as his tweet has nearly 2,000 retweets so far, and 14,500 likes!

Silva has certainly not been at his influential best for City, despite previously being a key member of Pep Guardiola’s side.

The 26-year-old joined City from Monaco in 2017 and won two league titles in his first two seasons at the Etihad Stadium, but his form dipped a little this season as MCFC only managed a Carabao Cup victory.

Liverpool ran away with the Premier League title race, and have also done far better than City in the Champions League in recent times, knocking them out in 2017/18 on their way to the final, before then going one better and winning the competition the following year.