With major doubts over Lionel Messi’s Barcelona future, this could end up being one of the biggest transfer sagas in footballing history.

According to a report yesterday from the reliable Marcelo Bechler, the man who broke the Neymar to PSG story three years ago, it seems Messi is ready to quit Barcelona after a legendary career at the Nou Camp.

The Argentina international surely won’t be short of suitors, so we had a look at five potential next destinations for him if he does end up leaving Barca.

How realistic is all this? Could it just be a ploy from Messi to force his club into changes at board level and in the transfer market? Only time will tell, but if he does finally head off for a new challenge, these seem like the most realistic teams he could join…

A reunion with Pep Guardiola in the Premier League? Man Utd and Liverpool fans wouldn’t like it, but surely most neutrals would be drooling at this prospect.

Messi enjoyed some of the best form of his career under Guardiola at Barcelona, and it would be incredible to see them working together again at City, where the 33-year-old could form part of a stunning attack alongside other big names like Sergio Aguero, Raheem Sterling, Kevin De Bruyne and Bernardo Silva.

It’s already been claimed by the Daily Mirror that if Messi does leave Barca, Man City feel they’re in pole position to lure him to the Etihad Stadium.

With the huge boost of qualification for the Champions League, perhaps United could be in the equation here?

Of course, the Red Devils are not what they once were and Ole Gunnar Solskjaer’s style of football perhaps doesn’t seem ideally suited to Messi’s game, but this is a club that can’t resist a marquee signing, and this would be the biggest of them all.

United could certainly do with strengthening their attack this summer and given that they’ve apparently been dealt a blow in their pursuit of Jadon Sancho, we think they’d probably quite happily settle for Messi as a Plan B…

Clear message from an insider at Dortmund:

– There is NO chance that Sancho will leave the club. It’s carved in stone: He will stay.

Surely one of the few teams who could afford Messi without too much trouble, whilst also being able to offer him a reunion with his old team-mate and friend Neymar.

Imagine Messi, Neymar and Kylian Mbappe up front against the relatively non-competitive teams of Ligue 1 next season – it would be an absolute bloodbath, and perhaps the signing that could really help clinch PSG’s place as a dominant force in Europe.

It would be a shame if a club with money won out over clubs with a bit more history and tradition, but it’s also undeniable that it would be great entertainment. 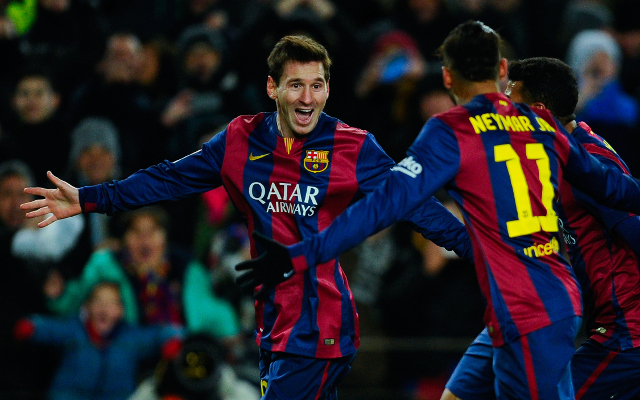 Could Messi and Neymar link up again at PSG?

Well, this would be quite something – Messi and Cristiano Ronaldo together at Juventus? Or perhaps a swap deal involving the two GOATs of this generation. Guillem Balague recently suggested Ronaldo’s Juventus future was in doubt and that he’d been offered to Barcelona.

? 'Juventus wants to get rid of his wage, he's been offered everywhere including Barcelona' @GuillemBalague on the future of @Cristiano Ronaldo

Whether they become team-mates or swap places with each other, it would be a fitting end to the drama involving these two long-running rivals if they were to be directly involved with each other in this summer’s big transfer saga.

Recently linked as suitors for Messi by Gazzetta dello Sport, Inter Milan are an ambitious club building a strong side under Antonio Conte, so could they really pull this move off?

The Italian giants have a history of signing some of the world’s biggest names, perhaps most notably when they signed the Brazilian Ronaldo from Barcelona back in 1997, and this would be an even bigger deal.

If Messi did join Inter, and Ronaldo stayed at Juventus, it would be great to once again see these two battling for supremacy, this time in Serie A, in what could finally make the competition a bit more interesting after years of dominance by Juve.