Arsenal have been given an update on their pursuit of the Thomas Partey transfer.

The Atletico Madrid midfielder is understood to be a top target for Arsenal manager Mikel Arteta this summer, with the Gunners in urgent need of strengthening in midfield.

It’s been a poor season for the likes of Matteo Guendouzi and Lucas Torreira in that position, and Partey seems like he’d be a clear upgrade in that department.

The Ghana international, however, has a €50million release clause, and the latest from reliable journalist Fabrizio Romano is that Arsenal would have to pay that in full to have any chance of signing him… 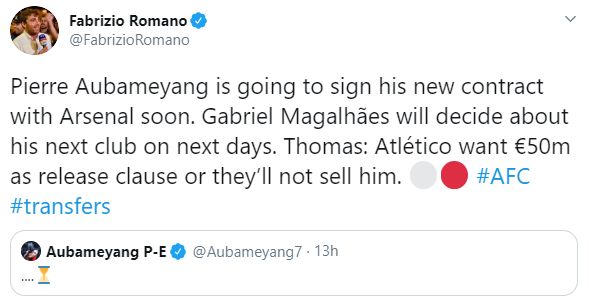 Romano has positive news for Arsenal with regards to Pierre-Emerick Aubameyang signing a new contract, while it also looks like Lille defender Gabriel Magalhaes could soon decide his next move.

Partey, however, is not going to be an easy signing for AFC, who may well need to sell before they can buy in that area of the pitch.

Arsenal fans will hope the club can offload under-performing players like Guendouzi and perhaps also Mesut Ozil and Alexandre Lacazette to raise the funds needed for a top player like Partey.