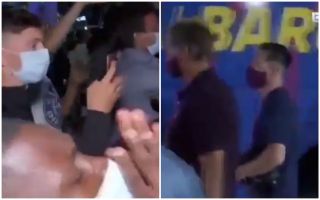 Barcelona fans gathered to give their team a frosty welcome home after their 8-2 Champions League humiliation at the hands of Bayern Munich.

Barca fans have every right to be furious with how their players conducted themselves, as there seemed to be so little fight against Bayern, who should not have been able to sweep them aside with such ease.

Lionel Messi and co. also missed out to rivals Real Madrid for the La Liga title this season.