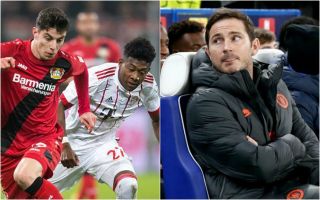 Chelsea are reportedly ready to pay around £52.4million for the transfer of Barcelona attacking midfielder Philippe Coutinho this summer.

According to Don Balon, the Blues are looking at Coutinho as an alternative to Bayer Leverkusen starlet Kai Havertz, with a deal for the Germany international seemingly dragging on without much progress.

Chelsea could target Coutinho as an alternative, with the Brazil international unlikely to have a future at the Nou Camp after a disappointing spell in La Liga.

Despite being a world class performer during his time at Liverpool, Coutinho failed to find his feet at Barcelona and spent this season on loan at Bayern Munich.

The 28-year-old scored twice for loan club Bayern against Barca in their Champions League clash last week, but overall he’s not had the most convincing campaign at the Allianz Arena either.

Philippe Coutinho is a transfer target for Chelsea

Arsenal and Chelsea in talks over SHOCK swap deal transfer

This could open the door for Chelsea to pounce for a player who has shown what he can do in the Premier League, and who could revive his career with a return to  England.

Coutinho could be an ideal Eden Hazard replacement for Frank Lampard’s side, even if there would of course be some risks associated with signing a player who has looked so out of form for a while now.