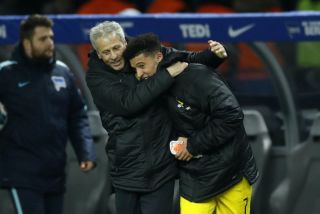 Borussia Dortmund manager Lucien Favre has fired star-man Jadon Sancho a warning of where his game must improve amid intense speculation linking him with a summer move away to Manchester United.

Sancho, 20, is still United’s number-one target despite a recent statement issued by Dortmund sporting director Michael Zorc claiming that the young Englishman will remain with the Black and Yellows next season, as per Sky Sports.

The talented attacker has experienced a monumental rise to become one of Europe’s most hottest prospects having endured a highly impressive last campaign after being involved in 40 goals in 44 appearances in all competitions.

However, despite the intense speculation surrounding Sancho’s Dortmund future, with every passing day the proposed move does look increasingly less likely to materialise this summer.

The latest in this window’s biggest transfer saga sees Dortmund manager Favre address his plans for his exciting winger next season but also draw attention to some key areas of his game that he must improve upon.

“But he must also have in mind that he still has a lot to learn.”

“He just has to control the ball better, he has to lengthen the ball more often with his head, and he has to defend more clearly. He mustn’t always stop and stand for ten minutes and then do something again for ten minutes. “

Speaking in light of Zorc’s recent statement stating that Sancho will not be departing Dortmund, Favre said: “It is important that he stays with us.

“That is of course also important for the team.”