It’s common to see players break into the first team at a very young age, so you can never truly tell if a young signing is for the future or for now.

There’s been plenty of talk about Barcelona wonderkid Marc Jurado joining Man United this summer, and a report from Goal has indicated that it’s finally going to be completed.

It actually sounds like the deal was agreed a long time ago, but there was a massive delay in getting the paperwork done and international clearance should be sorted in the next few days.

Because he’s coming from Spain he won’t be able to start training until he completed a 14 day period of self isolation, but it will be interesting to see how he gets on.

Man United do have a weakness at left back so the 16 year old will fancy his chances of breaking into the team eventually, but it would be a surprise if he’s anything more than a youth team player next season. 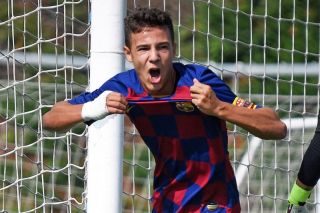