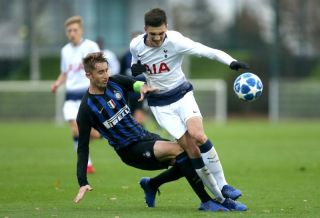 Ryan Nolan is a young, Irish centre-back currently playing senior professional football in Italy. After impressively captaining giants Inter Milan’s under 19s, the talented defender now dreams of a long-awaited move to England’s top-flight as he seeks to take the next step in his already remarkable career.

Nolan, 21, was born in Shannon, Ireland in 1999 and has gone onto become one of European football’s most impressive young defenders.

After moving to Spain at the tender age of eight Nolan went onto play for Spanish outfit Valencia’s under 15s academy before making an impressive switch to Italy where he captained Italian giants Inter Milan’s under 19s team.

In an exclusive interview with CaughtOffside Nolan reminisced about his inspiring under 19s captaincy by saying: “It was a big honour to be the captain of the main academy team, the Primavera is highly regarded in Italy and I won it twice in three years.”

The young Irishman continued his impressive rise to top-flight football and made his first appearances for Inter Milan’s first-team in the Nerazzurri’s 2018-19 pre-season. Later on during the same season, Nolan was named in former manager Luciano Spalletti’s Europa League squad.

The intelligent centre-back also has a wealth of international experience after featuring for Ireland’s under 16s, 17s and 18s having played regularly for now senior manager Stephen Kenny.

“He has been in with the U18s previously and I think he is a traditional ‘number 5?, if you like. He is a very, very good defender.”

At six foot two, right-footed Nolan is not only a commanding centre-back, his technically composed nature sees him best suited as a ball playing centre-back who has become accustomed to the modern game by way of seamlessly transitioning play from the back-line to the midfield.

Nolan also has the versatility within his game to play as a traditional number six often situated in front of his side’s back-line.

The youngster’s ability and tactical awareness to move the ball quickly and effectively places him in a very sought after category of defender. Modern football has become familiar with seeing defenders operate a more technical game in recent years after the likes of Pep Guardiola pioneered the defensive style of play.

Not only does Nolan provide a sense of calmness and composure when in possession, when without the ball, the Irishman thrives off making vital game-winning tackles and interceptions.

Video: Liverpool may have dodged a bullet by avoiding defensive target after he picks up two stupid yellows in a minute

When asked which professional Nolan most idolises, he said: “It has to be Nemanja Vidic and at present I love watching [Virgil] Van Dijk, he makes things look so easy.”

Despite Nolan’s impressive rise in Italian football, current Inter Milan boss Antonio Conte’s arrival at the San Siro in 2019 meant Nolan was forced to consider his future amid the possibility of limited competitive game-time.

Unlike England, there are no under 23s sides in Italy, therefore, Nolan opted to leave the club he had been with for three-years earlier this year and join Serie C side Arezzo.

Although the talented defender is enjoying life at his new club, he dreams of making a switch to England’s top-flight to play in the illustrious Premier League.

“Since I was a kid growing up watching English football, I have always dreamt of playing in the Premier League.” Nolan said.

There is often an inaccurate view that Italy’s third-tier contains a sub-par standard of football, however, Nolan has taken his chance to master his defensive abilities by plying his trade in a notoriously hostile league before aiming to unleash his talent on the British leagues.

It goes without saying that Italian football is best known for it’s defensive resilience and with Nolan’s ‘Catenaccio‘ style of play accompanied by his leadership and determined nature, the Irishman’s game really does have all the required ingredients to make it in England’s top-flight.

As clubs like Liverpool embark on a proven to work strategy of signing players with the raw attributes and then develop them into positional world-beaters through the use of managerial and tactical consistency, Nolan’s frame-work could make him a very attractive prospect for any aspiring club.

The 21-year-old is a smart and seriously skilled footballer in his defensive capabilities and he uses that skill to his advantage. The youngster reads the game exceptionally well and is exceptionally composed which allows the entire team to defend as an effective force.

Arguably the most appealing factor in Nolan’s situation is that he is currently available for free, or ‘Niente‘ as the Italians would say.

Given the current financial crisis clubs face at the hands of the ongoing COVID-19 pandemic, Nolan’s risk-free availability could convince English clubs to seriously consider bringing the talented defender to the United Kingdom.

The widely regarded blue-print of clubs remaining self-sufficient has been a model football enthusiasts have witnessed be best deployed by the likes of Germany’s Borussia Dortmund.

A plethora of clubs have become reliant on acquiring raw, talented players to develop internally before selling them on for a tidy profit and Arezzo’s Nolan would fit this model perfectly.

The gifted young pro displays all the characteristics both mentally and physically to warrant a dream move to England’s big leagues where he can be encouraged to take the next step in his promising career.