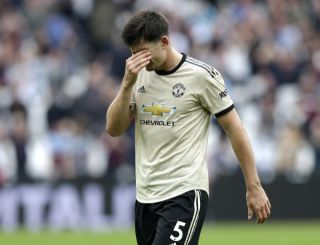 Manchester United’s captain Harry Maguire was reportedly arrested in Greece in the early hours of Thursday morning after a brawl broke out between two parties outside of a bar in Mykonos, according to Greek outlet Protothema.

Maguire, 27, is currently in Greece on his summer holiday after enduring a long, hard season with United which saw him help guide the side he captains to a third place Premier League finish.

Despite the Englishman’s faultless behaviour during the COVID-19 lockdown, he has now found himself in hot water after it was reported that he was arrested in the early hours of Thursday morning after a brawl outside of a bar broke out.

However, the latest development in this breaking story is that Maguire allegedly punched a Greek police officer who was called to the scene.

According to Greek state TV channel ERT, as quoted by ESPN, Maguire physically assaulted a Greek police officer who was called to help break-up a brawl which broke out between Maguire’s party and a second group of tourists.

As quoted by BBC Sport, United officials have confirmed in a recent statement that their captain is operating with Greek authorities, the club said: “The club is aware of an alleged incident involving Harry Maguire in Mykonos last night.

“Contact has been made with Harry, and he is fully co-operating with the Greek authorities. At this time we will be making no further comment.”