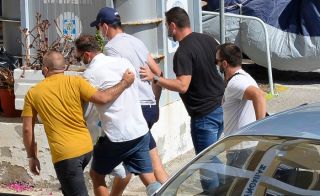 Manchester United captain Harry Maguire has arrived at Syros police station from Mykonos ahead of his scheduled court appearance relating to his alleged assault on a Greek police officer which is set to take place tomorrow.

The 27-year-old United captain was allegedly involved in an altercation in the early hours of Thursday morning which resulting in a Greek police officer being hit, as per Protothema.

As the story developed, Greek state TV channel ERT reported, as quoted by ESPN that Maguire had not only been involved in the altercation, he was the person responsible for hitting the police official.

The latest development in the story is that Maguire has recently been escorted to Syros police station from Mykonos as he awaits his first court apperance expected to take place tomorrow.

United officials released a statement earlier today, as quoted by BBC Sport which read: “The club is aware of an alleged incident involving Harry Maguire in Mykonos last night.

“Contact has been made with Harry, and he is fully co-operating with the Greek authorities. At this time we will be making no further comment.”