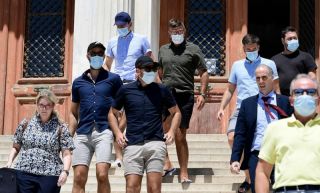 The shocking details of Manchester United’s captain Harry Maguire recent arrest in Mykonos in Greece have emerged as it is reported that his sister was stabbed in the arm which led to the English defender being involved in a brawl outside of a bar on Friday morning.

Maguire, 27, was arrested on assault and bribery charges after he was caught engaging in a brawl in Mykonos in the early hours of Friday morning, according to an original report by Protothema the English defender also hit a Greek police officer.

United’s captain has left court earlier today a ‘free man’ and will be able to return to the United Kingdom amid speculation he could be forced to stay in Greece whilst the case is ongoing.

However, the latest in the news surround Maguire’s holiday antics comes in a shocking report from Mykonos Voice, who claim that the defender fought rival fans after his 19-year-old sister, Daisy Maguire, was stabbed in the arm with a ‘sharp object’.

The report, as quoted by Daily Star, claims that Maguire leapt to her defence after he became aware of her arm bleeding, it is alleged that the United captain was then “verbally abusive to and officer and then hit him.”