Arsenal have been offered the potential transfer of Bayern Munich midfielder Thiago Alcantara for around £27million this summer.

The Gunners could do with making a signing in that area of the pitch after Dani Ceballos’ success on loan at the Emirates Stadium in 2019/20, with no certainty yet over a permanent move.

Alcantara’s name is now being mentioned as a target for Arsenal, but CaughtOffside understands a deal for Ceballos, whether a permanent signing or another loan, remains the priority for the north London giants.

Arsenal have, however, been offered Alcantara for around £27m as Bayern look to offload the Spain international this summer.

With the 29-year-old in the final year of his contract at the Allianz Arena, there has also been talk of a possible move to Liverpool, though CaughtOffside understands Bayern are offering him around and struggling to find clubs willing to meet their asking price.

This is surprising given that Alcantara is such a quality player, as well as an experienced winner at the highest level after a fine career with Bayern, with Liverpool also arguably lacking that kind of player in their squad at the moment.

The playmaker has shone for Hansi Flick’s side in their run to this season’s Champions League final, but it may be that his age and fitness record is counting against him in a market where clubs are already likely to be a little more cautious due to the economic impacts of the COVID-19 pandemic.

It remains to be seen if Arsenal will take up the chance to move for Alcantara, but for now it seems that will depend on how things can progress with regards to Ceballos.

The Real Madrid ace became a key part of Mikel Arteta’s side last season, though Alcantara could offer something very similar to the side.

As recently reported by L’Equipe, and translated by Matt Spiro in the tweets below, Lyon midfielder Houssem Aouar may also be an option for that position… 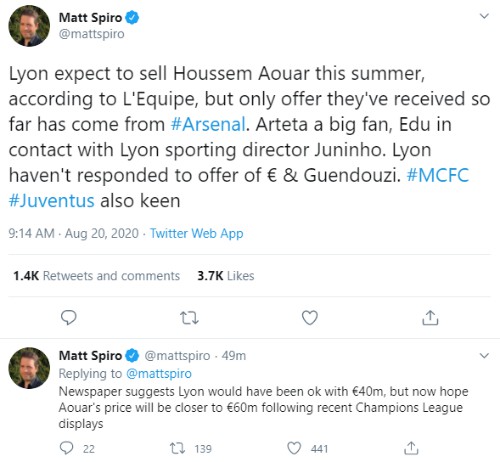 Midfield makes sense as a priority for Arsenal to strengthen in this summer after such a disappointing season in 2019/20, with the likes of Matteo Guendouzi and Lucas Torreira not really looking good enough.

Granit Xhaka improved as the campaign went on, but also had his struggles, and CaughtOffside have previously been told that Atletico Madrid star Thomas Partey is seen as another top target for Arteta in that area of the pitch.

Partey would be an ideal defensive midfield signing, with Ceballos a good option to have ahead of him, and one imagines AFC would view those two as better value for money than a move for Alcantara.

One imagines Arsenal will make sales this summer to aid their spending, but as things stand it seems unlikely they could afford to sign both Partey and Alcantara on permanent deals, which is why another loan for Ceballos, perhaps with a view to a permanent move, seems more likely.