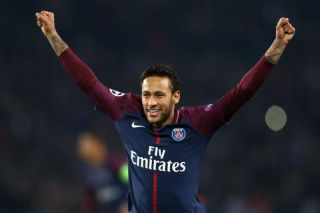 Paris Saint Germain forward Neymar Jnr boasts some absolutely ridiculous stats in the illustrious Champions League which very much cements his place among the world’s best.

The attacker is often considered in the same conversation as the likes of Lionel Messi and Cristiano Ronaldo, but rarely does he get the credit he deserves but with both of those stars heading for retirement, Neymar could finally be ready to step into their boots.

Ahead of tonight’s crucial Champions League final where Neymar’s PSG will face-off against 30-times record Bundesliga champions Bayern Munich, now is a perfect time to remind fans just how good the Brazilian is on the world stage.

The 27-year-old has racked up a total of 59 direct goal contributions in 59 Champions League appearances since his famous move from Santos to Barcelona in 2013.

The elite attacker moved to the French capital in a world record transfer of £199.8m (TransferMarkt) in 2017 and has gone on to be directly involved in 23 of the Parisian’s European goals.

As PSG and German giants Bayern Munich prepare to battle it out for this season’s most illustrious trophy, the Champions League, PSG fans will be all too aware that if they stand a chance of lifting their first ever Champions League title, star-man Neymar will need to emulate this same form.