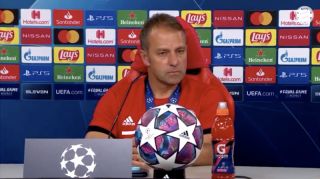 Bayern Munich manager Hans-Dieter Flick has dropped a major hint in his Champions League post-match interview that leading midfielder Thiago Alcantara could depart the German treble winners this summer amid speculation the Spaniard could be set for a switch to Jurgen Klopp’s Liverpool.

Speaking after his side’s amazing 1-0 win in tonight’s Champions League final against French title winners Paris Saint Germain, the German boss gave an update on the future of his star midfielder Thiago.

The German said, as translated by leading journalist Fabrizo Romano: “I don’t know and I think he doesn’t know either. We’ll have to wait and see what will happen.”

Hansi Flick about Thiago Alcantara’s future: “He told me he’s staying… (sarcastic laughter). No, I don’t know and I think he doesn’t know either. We’ll have to wait and see what will happen”. ? #LFC #Bayern #Thiago https://t.co/KWrZVvYIx0