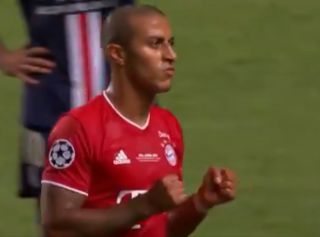 There’s been a lot of speculation about Thiago Alcantara and his Bayern future in recent weeks, so many will think that the Champions League final will be his final appearance.

He’s been heavily linked with Liverpool and The Mirror were one of many outlets to suggest that he might be on the way after tonight’s game, so that will be interesting to follow.

Playing behind closed doors has possibly robbed him of a chance to get a rousing send off from the fans, but Bayern’s staff in the ground did their best to give him a huge reception:

It looks like was Thiago's final moment in a Bayern shirt…