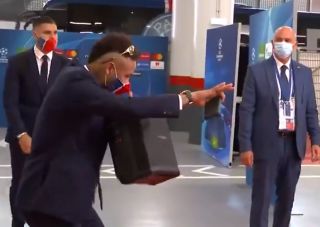 It’s fair to say that the Champions League final between Bayern and PSG will be the biggest game of a lot of careers, so there has to be a lot of nerves going on.

Certain players do seem to be more concerned about giving of a certain image than anything else, so of course Neymar went out of his way to show how relaxed and chilled out his is as he arrived for the game:

If anything it looks like he’s protesting too much, and he will be fully aware that he’ll need to play well if he wants a winner’s medal tonight.