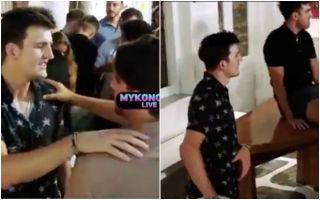 The whole situation with Harry Maguire is an astonishing one, and it could get even more crazy after the BBC confirmed that he has been found guilty of repeated bodily harm, attempted bribery, violence against public employees and insult after arrest.

Immediately everyone is going to speculate about a possible prison sentence for the Man United captain, but all the reports from recent days suggest that it’s very unlikely.

The Mirror reported a couple of days ago that Greece does have a system where criminals can pay a fee to avoid prison, mainly due to an overcrowding situation.

That report also suggested that Maguire was free to leave the country and didn’t need to attend the hearing, so it would lead to a fascinating situation if a prison sentence was recommended.

Admittedly his future as Man United captain and his place in the England squad will come under question too, while there will inevitably be a lot of press coverage about this in the next few days.

Sod’s law also dictates that Man United will inevitably be drawn against a Greek team in Europe this season too, so that will only add to the mess.