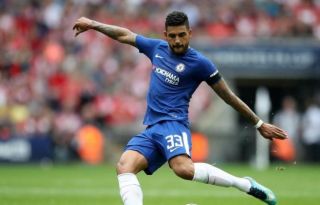 Usually one player coming in results in another leaving the club, and that appears to be the case with Chelsea and Ben Chilwell.

The Guardian reported that Chelsea signed the Leicester City man for a fee of around £50m, so it will be interesting to see if he lives up to that price tag.

Any doubters will wonder if Chelsea have made an error by paying so much, but it looks much better when you realise they can immediately get some money back by selling Emerson Palmieri.

Football Italia have confirmed that Emerson is now free to join Inter Milan after the arrival of Chilwell, and the Italian side could end up paying as much as €20m to make that happen.

They point out that it’s even more likely after Inter refused to take up the option to extend a loan spell for Cristiano Biraghi, so it seems inevitable that Emerson will reunite with Antonio Conte.

Left back has been a problem position at Stamford Bridge for a while, so paying some money to sign Chilwell and get rid or Emerson will look like a great move if the former Leicester man lives up to expectations.