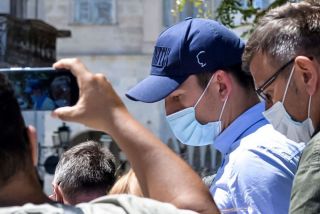 Manchester United defender Harry Maguire is set to meet with the club’s senior officials to discuss his captaincy in light of the Englishman being found guilty of three charges including bribery in a Greek court yesterday.

Maguire, 27, was arrested in the Greek town of Mykonos in the early hours of last Friday morning after a brawl between holidaymakers broke out.

The defender was also alleged to have hit a Greek police officer and then later try and bribe the authorities by offering money in exchange for his freedom.

Maguire was found guilty on all three charges in a Greek court yesterday which resulted in the 27-year-old losing his place in Gareth Southgate’s England team.

In light of the decision to withdraw from the national side, according to Sky Sports, Maguire is now set for showdown talks with United officials regarding his club captaincy.

However, despite Maguire’s England withdrawal, Sky Sports reporter James Cooper feels there is nothing indicating that the commanding centre-back will be stripped of the United armband, he said: “With England’s decision, it reflects dialogue between Gareth Southgate, Harry Maguire and Manchester United and it was taken as the right reason to take him out of the firing line.

“It gives him and Manchester United plenty of time to work out what they want to do in terms of the captaincy.

“What I’m told right now is there is no suggestion that Harry Maguire will have the captaincy taken from him.

“Manchester United have been as supportive as any club could possibly be in these circumstances.

“There will be conversations ongoing and this matter certainly isn’t closed.

“A lot of it depends on face-to-face chats between Harry Maguire, Manchester United, Ole Gunnar Solskjaer and Ed Woodward. Then, perhaps a decision will be made.”