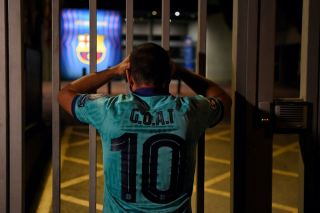 Lionel Messi has shocked world football after asking to leave Spanish giants Barcelona as it appears he is seeking a new club to see out the rest of his top-flight career.

READ MORE: The latest odds on where Barcelona talisman Lionel Messi could be playing next season

Messi, 33, is arguably the best player to ever grace the game having won an incredible six Ballon d’Or awards and showcasing one of the all-time most impressive trophy collections.

According to Sky Sports, the Argentinian is set to depart the club he has spent his entire professional career with as the Catalonian side face free-fall after their humiliating 8-2 Champions League defeat to eventual champions Bayern Munich.

However, despite fans’ shock that one of the world’s greatest ever players wants to quit his current club, according to ESPNDeportes, there were no surprises among his team-mates.

Journalist Jordi Duch claims that although the Barcelona squad didn’t know what kind of time limit Messi would put on his decision, they knew the world-class attacker would be determined he’d want to leave the club after their defeat to Bayern Munich.

Messi is being heavily linked with a move to the Premier League after bookmakers place Pep Guardiola’s Manchester City as the favourites to sign the South American.

What a saga this one could be.