At the moment Chelsea look like they could be fascinating to watch next season from a neutral point of view, mainly because they have so many attacking options and an awful defence.

They already looked good going forward to adding Timo Werner and Hakim Ziyech just makes that more exciting, but they also leak goals for fun and it’s great to watch.

Unfortunately you have to think that Frank Lampard won’t agree with that, so he’ll be doing all he can to improve the backline. Left back has been a problem position for a while, so the fans should be pleased with the signing of Ben Chilwell:

Obviously he’s not going to resolve all of their defensive issues on his own, so the fans will be hoping for a couple more additions.

The Mirror have recently reported that Chelsea have agreed a two year deal with former PSG captain Thiago Silva so he should make a big difference to the backline, while Sky Sports have indicated that Lille goalkeeper Mike Maignan is now being lined up to replace the much maligned Kepa.

That would allow Chelsea to line up like this next season, and it certainly looks like a well rounded team on paper: 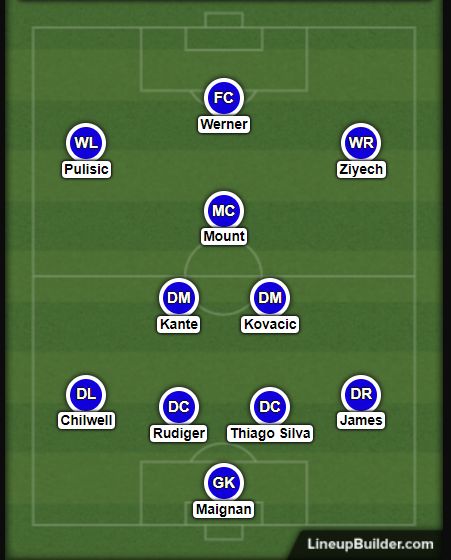 There would still be a couple of positions up for grabs as Kurt Zouma’s pace could be useful next to Silva, while Cesar Azpilicueta might be a safer option that James at right back.

Chelsea fans may still be holding out hope for someone like Kai Havertz to come in and really give the midfield a lift, but at least the defence is starting to look dependable.