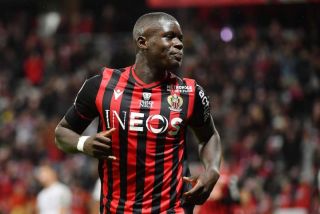 Chelsea have done it again. This summer’s biggest spenders have added yet another addition to their already frightening squad as former Nice defender Malang Sarr signs on a five-year deal.

Sarr, 21, has joined the Blues earlier today after departing Ligue 1 side Nice earlier this summer after his contract expired.

Chelsea released an official statement on club website Chelsea FC earlier today welcoming the young French youngster as club director Marina Granovskaia admitted the opportunity to sign Sarr was one they could not turn down.

The young defender made 20 senior appearances for Nice in all competitions last season with his only goal of the campaign coming in his side’s 3-0 dismantling of Toulouse in a Ligue 1 tie last year.

Despite Sarr’s top-flight experience in France, Chelsea have confirmed they plan on loaning their new youngster out for the duration of the 2020-21 season in an attempt to gain vital playing experience, director Granovskaia said: “The opportunity to sign Malang was one we could not miss. He is a tremendous prospect and we will be monitoring him closely during his loan period, hoping he will soon be back at Chelsea. We are very happy to welcome him to the club today.”

It has not yet been confirmed where Sarr will spend next season on-loan but with the Blues’ keen to add to his experience it would be reasonable to assume Frank Lampard would prefer him to remain in England.