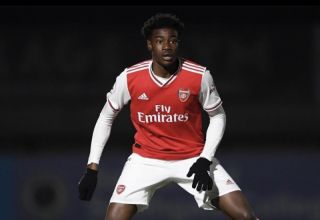 Arsenal’s highly-rated youngster Ryan Alebiosu put pen-to-paper earlier this week when he signed his first professional deal with the Gunners and is now expected to follow in the footsteps of the London side’s most talented prospects.

Alebiosu, 18, predominately plays at right-back but also has the ability to play further up the pitch as a right-sided winger.

The English youngster joined Arsenal’s youth set-up at the tender age of seven and has since gone onto make his way through the academy’s ranks.

Alebiosu made his debut for the club’s under 23 side earlier this year in January against Premier League 2 rivals Liverpool.

The exciting wide-man’s exciting potential has led him to eventually sign a professional deal with the Arsenal where he will continue his impressive development.

The Gunners officially announced the news earlier this week that the highly-rated youth prospect had committed his professional future to the club on their official website Arsenal.com and also took the time to congratulate the youngster.

In an exclusive interview with Alebiosu’s agent Roberto De Fanti, CaughtOffside asked whether or not Arsenal fans can now expect the talented Englishman to go out on loan or stay with the club’s academy, De Fanti said: “I believe that every career has it’s steps.

Ryan [Abebiosu] has to first show his qualities with the under 23s; once he has shown he can make the difference in the category he will surely be considered for the first team.

He is a very talented footballer, so I wouldn’t be surprised if he follow the footprints of Bukayo Saka.”

De Fanti went onto praise Arsenal’s academy and reiterate how bright the young Alebiosu’s future can be, he said: “I am very excited because I think that Arsenal is the best club for a player like him to develop.

[Bukayo] Saka, [Joe] Willock and [Eddie] Nketiah are a proof of this.

“The academy is of crucial importance for the club.”