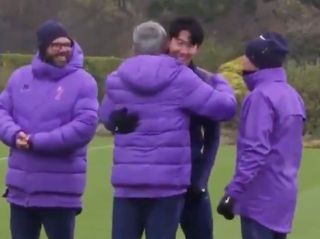 To many, Jose Mourinho is a bit of an acquired taste.

Ever since his opening press conference as Chelsea manager, where he announced himself as the ‘Special One,’ opinion has been divided on the Portuguese.

There’s little doubt that his managerial credentials put him in the elite bracket, but it’s the arrogance that he wears like a comfortable jacket which make him football’s greatest pantomime villain.

In any event, it would appear that he’s generally loved by the players that work for him, with one or two notable high-profile exceptions, and his latest gesture is bound to have made one Tottenham Hotspur player very happy indeed.

At the launch of the Amazon Prime series ‘All or Nothing,’ Mourinho noted the importance of being able to communicate with his staff, and to that end, he’s begun learning Korean.

“Communication is very important when I am with the group, I have to go to the native language, which everybody  understands,” Mourinho said, cited by The Sun.

“It’s respectful to the culture of the club to speak the language of the individuals in it. In the series it was a Portuguese group of coaching staff, although we now also have an English coach in Ledley King.

“And with the players,  I jump into their language — that is why I am learning Korean.”

Son Heung-min will surely appreciate the concession, and it’s the type of gesture that can only bring a manager closer to his players and earn their respect.