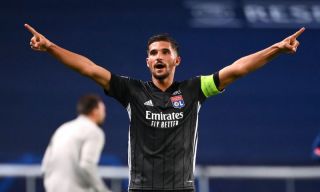 Aouar, 22, has become one of European football’s most sought after prospects after enjoying a highly impressive campaign last season having helped his side reach the Champions League semi-finals.

The young Frenchman has featured 41 times for Lyon in all competitions last season and was directly involved in 19 goals.

However, after such an impressive break-through campaign, especially on the European stage, Lyon are now preparing for life without the 22-year-old.

CaughtOffside has recently obtained information from a source close to the club that Pep Guardiola’s Manchester City have emerged as front-runners to land the talented Frenchman after making an initial £35m offer for the midfielder.

Last season’s Premier League runners-up have had their £35m bid quickly rejected by Lyon, however, the Ligue 1 outfit do expect Manchester City to come back with an improved offer.

Our source has confirmed to us that Lyon remain hopeful of a bid of at least £62m but would be likely to allow Aouar to depart should an improved bid of between £45 and £55m be made.

It is also our understanding that Guardiola’s Manchester City face strong competition for the highly-rated midfielder from French giants Paris Saint Germain.

We understand that alongside Manchester City, last season’s Champions League runners-up PSG are also negotiating the transfer of Aouar with their domestic rivals Lyon.

The strong interest in Aouar from two of Europe’s financial powerhouses could spark a bidding war as our source confirmed that talks between the three clubs have reached an advanced stage.