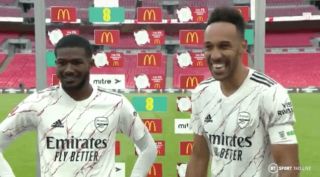 It’s been one of the transfer soap operas of the last few months, and Pierre-Emerick Aubameyang was giving nothing away in his post-match interview after Arsenal’s Community Shield win over Liverpool.

The Gabonese striker has kept the Gunners fans on tenterhooks for weeks, not confirming or denying that he will sign a new contract with the north London outfit.

If they were hoping to hear a resounding yes after another super performance that included a goal and the winning penalty, then Arsenal’s supporters will have been disappointed, because Aubameyang again kept his cards close to his chest.

? “I’m an Arsenal player until I am told otherwise…”