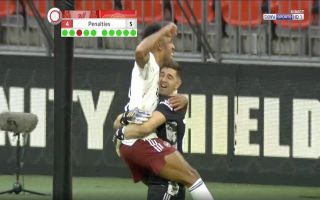 With the Community Shield ending 1-1 at the end of regulation time, the season-opening tie headed to a penalty shootout to decide the winner – and this didn’t disappoint.

Neutral fans were certainly treated as Rhian Brewster had the unfortunate displeasure of being the only player to miss from the spot.

Alisson and Emiliano Martinez didn’t really get very close to saving any attempts, with the two stoppers being sent the wrong way for most of the spot-kicks.

The decisive moment for Liverpool came as Brewster stepped up to take the third, the promising striker rattled the bar after a very unusual short-step run-up.

Pierre-Emerick Aubameyang sealed a victory and silverware for Mikel Arteta’s side with the Gunners’ fifth attempt as he tucked the ball into the corner following a wide-angled run-up.

Arteta’s tactics and a fine performance from the Gunners outclassed the reigning Premier League in most departments, the Spaniard continues to show encouraging signs as boss.

Wembley seems like holy ground for Aubameyang, after firing Arsenal to the FA Cup here a month ago, the centre-forward opened the scoring this afternoon with a fine strike.