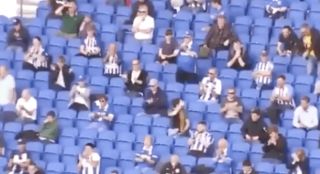 It’s a stark image and one that everyone will surely have to get used to over the next few months.

When Frank Lampard took his Chelsea side to Brighton and Hove Albion for their first pre-season friendly of 2020/21, they were able to play in front of supporters for the first time in months thanks to a pilot scheme designed to test social distance protocols.

It’s the first step in getting back to normal and having more supporters at football grounds.

Spread out at the AMEX Stadium, 2,500 lucky souls got to see Timo Werner open the scoring for the Blues before a late Brighton equaliser saw the spoils shared.

Timo Werner scored his first goal for Chelsea as they drew with Brighton on Saturday in front of a small crowd at the Amex pic.twitter.com/NzYKTMsbrm