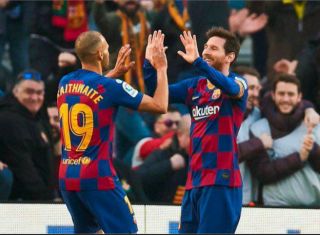 While most squad numbers carry little importance, at certain clubs a specific number will carry so much history and it’s vital that the shirt is only given to players who deserve it.

The number 10 shirt at Barcelona is the perfect example, with Lionel Messi, Ronaldinho, Romario and Diego Maradona all being examples of elite players who donned that number.

With that in mind, it seems perfectly reasonable to suggest that Martin Braithwaite shouldn’t even be allowed to buy his own replica shirt with his own name and number 10 on the back.

READ MORE: Another twist in the Lionel Messi saga as he informs Barcelona that he’s not their player anymore

Spanish outlet 20 Minutos have suggested that the Danish misfit has gone one better, by asking the club for Messi’s squad number if he leaves this summer.

In a way you almost have to admire the sheer optimism from Braithwaite here – he’s only at the club because they literally had to panic and go with a last resort, and there’s little to suggest he’s part of Ronald Koeman’s plans going forward.

The report does indicate that him getting the number 10 would be reliant on Messi actually leaving the club, but there are numerous other reasons why he won’t be getting it either.