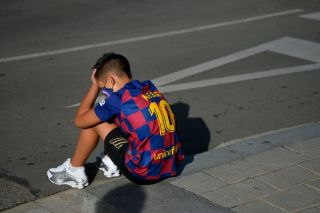 Barcelona elite attacker Lionel Messi is continuing to push for a shock summer transfer after failing to turn up at the club for a Coronavirus (PCR) test.

Messi, 33, shocked the world last week after declaring he wants to leave the club he has been with for the last 20 years, as per Sky Sports.

The Argentinian’s shock revelation claim came after his side were humiliated 8-2 in last season’s Champions League quarter-finals against Bayern Munich.

The star-attacker’s future has been thrown into my doubt after it has emerged that he was scheduled to take a PCR test today but has failed to turn up, the news was echoed by leading journalist Fabrizio Romano who retweeted the news.

??Lionel Messi hasn’t shown up for his PCR test today in an attempt to put pressure on the club to let him leave. pic.twitter.com/wea2JVJRcT

Sky Sports have reported this morning that the Spanish giants are ‘unwilling’ to allow their forward to leave the club this summer.

Messi has been heavily linked with a switch to Premier League side Manchester City as it is thought he would prefer to play under ex-manager Pep Guardiola.

The situation in Barcelona is far from straightforward though and with Messi’s latest stance after failing to show for his PCR test, this one looks set to rumble on.