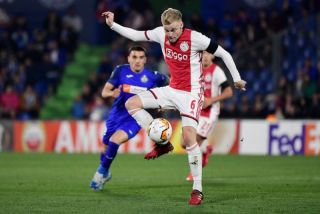 van de Beek, 23, has enjoyed yet another impressive campaign with Ajax having been directly involved in 14 goals in 23 domestic appearances in a season which now looks to be his last in Holland.

The talented midfielder has emerged as a major contender to become United’s first, first-team signing of the summer after speculation surrounding his future was intensified last night after he was excluded from Ajax’s squad to face Eintracht Frankfurt in a pre-season friendly.

ESPN’s report states that despite previous links to the likes of Barcelona, the Dutch midfielder does not consider joining the Spanish giants as an option.

However, despite long-standing interest from Real Madrid most notably back in 2019, it now appears that Ole Gunnar Solskjaer is leading the race to sign the highly-rated box-to-box midfielder.

According to a recent by The Mirror, the 23-year-old has told Ajax chiefs that he will not feature for the Dutch side again as he now becomes the red hot favourite to join Solskjaer at United.