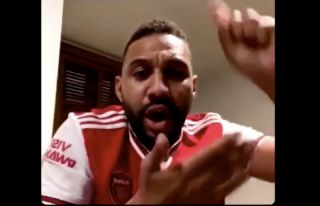 The star-forward’s brother claims that he will be in London on Monday or Tuesday next week but won’t say exactly what the purpose of his visit will be.

Clearly from the excited tone in his voice, Willy Aubameyang is hinting that his brother Pierre-Emerick is going to extend his current contract with the Gunners by putting pen-to-paper and signing a new deal.

Pierre-Emerick Aubameyang’s brother Willy, on Instagram Live with Troopz: “I’m coming to London on Monday or Tuesday. I can’t tell you for what though.” ? [@AFTVMedia] #afc pic.twitter.com/9gi2eN3iwV