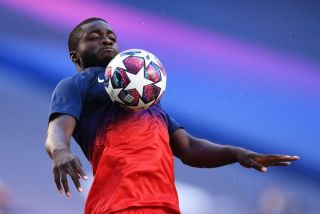 Upamecano, 21, has been one of European football’s most highly-rated break-through talents last season after enjoying a thoroughly impressive campaign as he helped guide his side to the Champions League semi-finals.

According to ESPN, Ole Gunnar Solskjaer is targeting the 21-year-old centre-back as his second acquisition of the summer transfer window after agreeing a £40m move for Ajax’s van de Beek.

The report claims that Solskjaer is set to go after a top quality centre-back to partner club captain Harry Maguire and Upamecano is believed to be the primary target.

It is also understood that a host of United defenders could be set for the exit in order to open the door for Upamecano, the list of departures include Marcos Rojo, Chris Smalling and Phil Jones.

Solskjaer is understood to be concerned about the fitness and reliability of Victor Lindelof, Eric Bailly and Axel Tuanzebe which is only further intensifying the club’s desire to bring in a new centre-back.