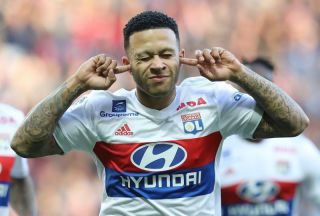 Inter Milan are tracking Lyon’s Memphis Depay as Antonio Conte wants to add the exciting attacker to the Nerazzurri front-line. Manchester United had been keeping tabs on the Dutchman but he is believed to opt against a return to the Reds.

Depay, 26, joined Lyon from United back in 2017 after enduring a tough 18-months with the Reds which saw him fail to impress ex-managers Louis Van Gaal and Jose Mourinho before eventually being sold on for just over £14m.

Since the forward’s arrival in France he has gone onto showcase some of his best form after most recently helping his side reach last season’s Champions League semi-finals.

The 26-year-old’s Lyon future has been thrown into doubt since the popular French club failed to qualify for next season’s Champions League after finishing seventh in the Ligue 1 table.

Lyon’s failure to secure European football next season has prompted speculation that the exciting attacker could make a move away from the Groupama Stadium this summer.

Video: Eddie Nketiah scores again for Arsenal after impressive improvisation as he falls over

CaughtOffside has recently obtained information from a close source that Serie A giants Inter Milan are interested in securing Depay’s services.

No official approach has yet to be made for Depay, however, one destination the player is unlikely to be heading for is Manchester United.

United entered a clause into the 2017 deal which saw Depay join Lyon which granted the Reds a ‘first consideration’ option, it is understood that despite United potentially having the option to pursue Depay, they’re unlikely to do so because the Dutchman does not want an Old Trafford reunion.

We understand that Depay’s experience with United was considerably tainted after clashes with former boss Van Gaal.