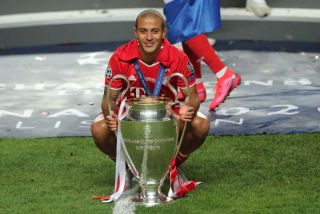 READ MORE: Video: Jose Mourinho tells his critics to “f*** off” in hilarious Tottenham All Or Nothing clip

Thiago, 29, is arguably one of the world’s best midfielders having played a major role in his side’s hugely successful season after they won the Bundesliga, the DFB-Pokal and the Champions League trophy.

The Spanish midfielder is best known for his ability to dictate proceedings with his highly impressive technical ability, Thiago has the capability to decide when and how a game is won. The exciting and immensely talented central-man would undoubtedly be a stunning addition to any club side in world football.

Thiago is rumoured to be available this summer for a modest £27m, as per Guardian, however despite such a reasonable price-tag, front-runners Liverpool are failing to stump up the funds required in order to secure the talented Thiago.

Jurgen Klopp’s reluctancy to pay what is being ask for Thiago has paved the way for rivals United to enter into the mix for the Spanish midfielder.

According to a recent report from German outlet Welt am Sonntag as quoted by TalkSport Bayern Munich are expecting a transfer approach for Thiago in the next few days.

Bayern Munich chairman Karl-Heinz Rummenigge said: “We are expecting an offer from another club in the next few days.

“He told us that at the end of his career, he would like to try something new.”

The news that Bayern Munich are expecting an imminent approach for their star-man comes as United finally begin to step-up their transfer market activity after agreeing terms with Ajax midfielder Donny van de Beek, as per Sky Sports.