Arsenal have dropped the biggest hint yet over the possible transfer of Lille defender Gabriel Magalhaes.

See below for a screen grab from the Gunners’ Facebook page as they prepare for an event at 4pm today that will involve David Luiz, Willian and one other special guest.

As you can see in the image, there’s a Brazil flag in the letter ‘o’ of the ‘Group Chat’, which suggests the duo are being joined by one of their fellow countrymen… 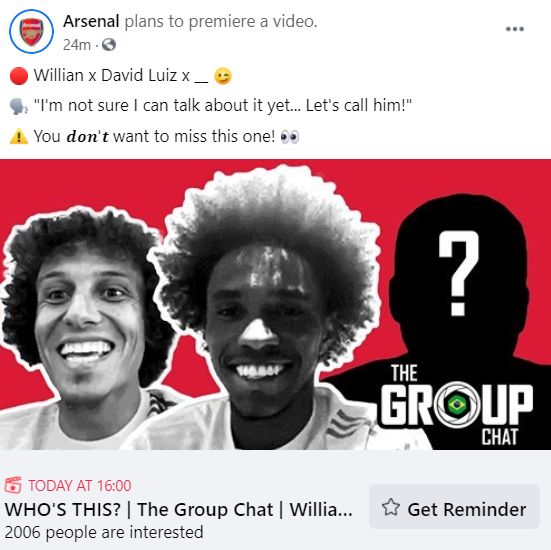 Arsenal tease that fans won’t want to miss this announcement, and it follows strong speculation that Gabriel is on his way to the Emirates Stadium.

Liverpool players disrupted by fireworks at 1.45am in possible blow to title hopes
Juventus set to challenge Arsenal for Man City star and have trick up their sleeve
How Arsenal and Man United benefited from Kylian Mbappe Real Madrid transfer saga

The Guardian have claimed the 22-year-old could be confirmed as an Arsenal player in the coming days, so maybe this afternoon will finally be the moment fans have been waiting for.

Gabriel has looked a hugely impressive talent in his time in Ligue 1 and should strengthen a problem position in Mikel Arteta’s squad.