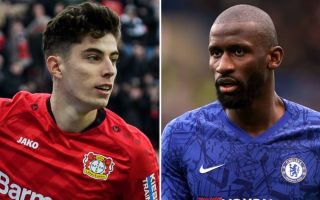 Chelsea defender Antonio Rudiger has spoken out on the Kai Havertz transfer situation as the Bayer Leverkusen attacking midfielder continues to be linked with the Blues.

The Germany international has shown himself to be one of the finest young players in the world in his career so far, and Chelsea fans will surely be excited about another big-name addition to their squad after their strong start to the summer.

Chelsea have already signed Timo Werner, Hakim Ziyech, Ben Chilwell and Thiago Silva, and Havertz’s arrival would be another major statement of intent from the club.

Mundo Deportivo are among the sources to suggest the west Londoners are closing in on completing a deal for Havertz, and Rudiger has also spoken out on doing his bit to lure his fellow countryman to the club.

See below as Rudiger is quoted by Sport Bild’s Christian Falk as suggesting he may have played a role with Havertz, as he did with Werner earlier this summer…

Agent Toni @ToniRuediger about @kaihavertz29: „I made my contribution to Timo. I hope that it will happen with Kai too“ @ChelseaFC