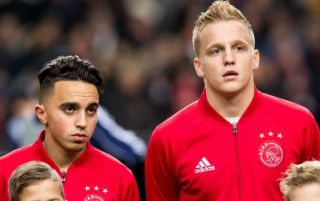 Ajax star Donny van de Beek is reportedly likely to take the number 34 shirt once he completes his transfer to Manchester United.

The Netherlands international could make this choice as a special and classy tribute to his former team-mate Appie Nouri, according to the Daily Mail.

United fans may be aware that Nouri, 23, was forced to retire from football after suffering permanent brain damage after collapsing in a game in 2017.

The former Ajax midfielder wore the 34 shirt at the Amsterdam club, and Van de Beek is now reported to want to pay tribute to his friend by taking that squad number at Old Trafford, according to the Mail.

This truly shows Van de Beek’s class off the pitch as well as on it, and Man Utd fans can be pleased to see this kind of character from their incoming new player.

Nouri’s story is a very sad one, but Ajax have continued to pay tribute to their former player, with his father invited to lift the club’s 34th Eredivisie title with the players in May 2019.